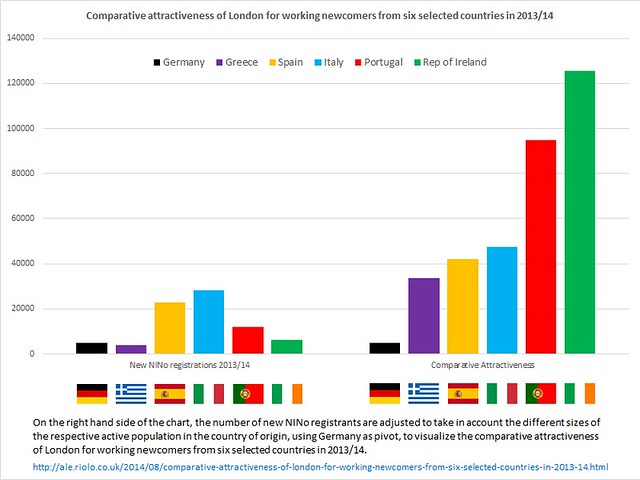 Given that the Dublin to London is the busiest passenger air international route, and in general the short distance and the historical ties, it should come to no surprise that Irish are particularly sensitive to the charm of the modern Babylon. Historical ties come possibly into play to help explain the Portuguese fascination with our much desired Cockaigne, as there must be a reason why the Anglo-Portuguese Alliance, well into its seventh consecutive century of life, is the oldest alliance in the world that is still in force. On the other hand, while it is not surprising that, given the current status of the national economy in both Spain and Italy, people from both those countries may currently feel lured by London more than in any other time in recent decades, it is somewhat puzzling to note that Greeks appear slightly less enthralled than their Mediterranean counterparts. Last but not least, looking at how hard is for London to attract Germans, one wonders if this behaviour may be not so much linked with the state of the German economy, but to a completely different class of non economic related issues.
Posted by Alessandro Riolo at 01:04