Greece had to do quite a catch up to reach the peaks of under 25 unemployment more usual in Magna Graecia. Luckily for the Greeks, in 2014 Campania, Sicily, Apulia and above all Calabria performed worst, truer to their sad tradition: 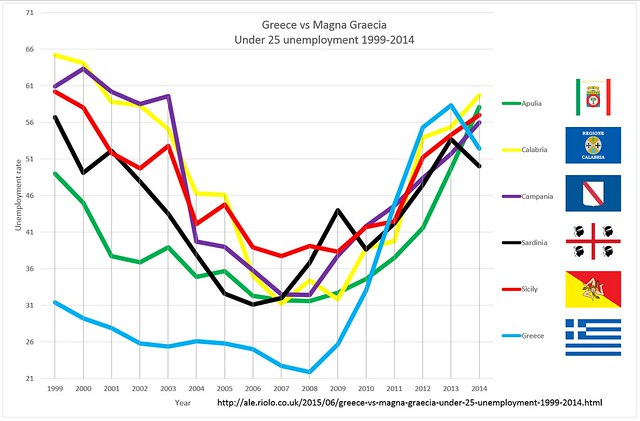 The Eurostat data used in the diagram above can be found in the "Unemployment rates by sex, age and NUTS 2 regions (%)" dataset (lfst_r_lfu3rt).
Posted by Alessandro Riolo at 22:43 0 comments

Compared with the poorer third of Italy, Greece wouldn't appear to have such a big inactivity issue. Actually, the inactivity rate for the over 15 under 64 population appears to have slightly decreased in recent years: 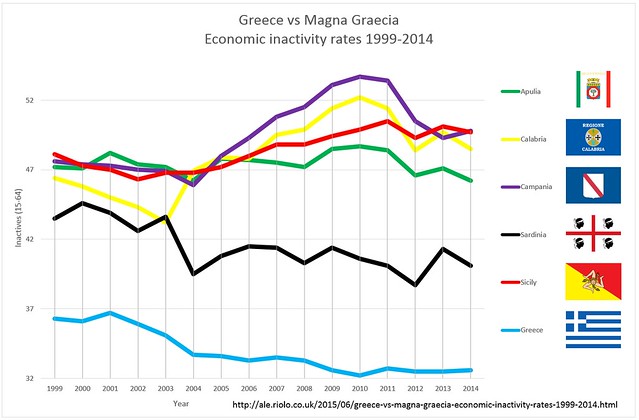 The Eurostat data used in the diagram above can be found in the "Economic activity rates by sex, age and NUTS 2 regions (%)" dataset (lfst_r_lfp2actrt).
Posted by Alessandro Riolo at 22:36 0 comments 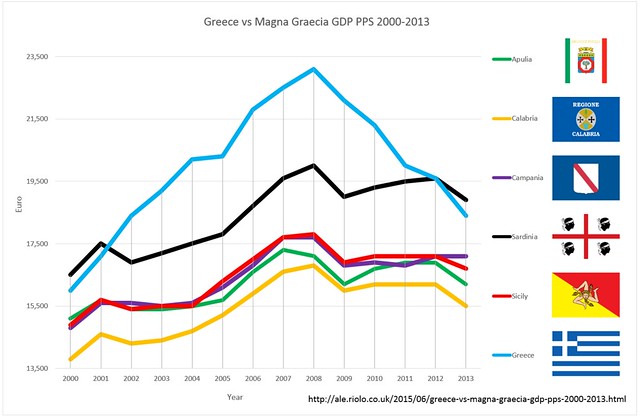 P.S.: the title of the diagram and of the article is a simplification: Sardinia, like Abruzzi or Molise, was never considered part of Magna Graecia, but I did add one and left out the other two. Also, I didn't forget Basilicata, which instead was quite central to the concept of Magna Graecia, but the diagram was already pretty complex, so I decided to leave it out. Basilicata would have fared somewhere half way between Sardinia and Sicily.
Posted by Alessandro Riolo at 18:14 0 comments